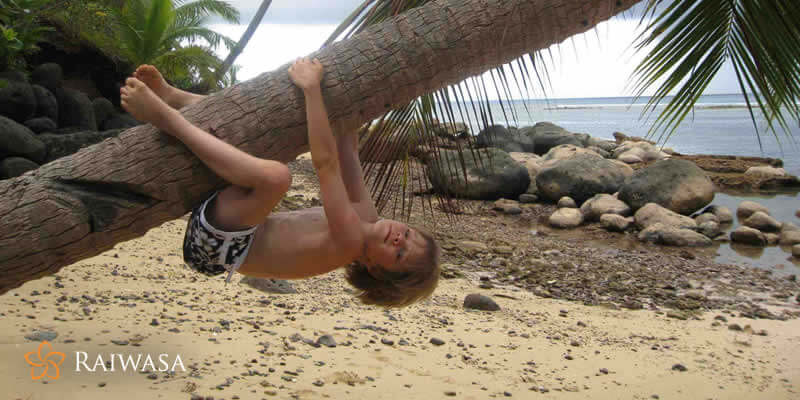 Taveuni is the third biggest island in Fiji and known as Garden Island. This appropriate nickname comes from the incredible amount of vegetation and lush jungle on the island. Plus, Taveuni has the unique quality of being one in only a handful of spots, along with Northeastern Russia and Antarctica, where the 180th meridian crosses the land.

Taveuni is rough, verdant and immaculate. It lays around 7 km off the southeast shore of Vanua Levu and is 42 km in length and averages around 12 km wide.

It is the place with a lot of rain that results in some of the most gorgeous and fascinating foliage in the world. It is the rain that ensures Taveuni remains a tropical paradise. But visitors must not depend on climate forecasts, as the Taveuni weather can be unpredictable.

Taveuni has a populace of around 19,000 occupants today, a sparse population that spans the entire island in, often, rural settings. In fact, the majority of the neighborhood inhabitants still live in traditional towns. While much of Taveuni remains protected land and intimate communities, there are two towns that attract locals and visitors to the island. The twin towns of Somosomo and Naqara. It is the area of the Meridian Cinema highlighted in the 2004 motion picture Reel Paradise.

Taveuni is an originally incredible tropical island, thick with vegetation and radiant with tropical blooms. Immaculate rainforest covers a significant part of the island and around 80% of the remaining tropical jungle is under protected status by the Fijian government, including the famous Bouma National Heritage Park.

Taveuni offers visitors, a rich natural history and wide range of animal and plant life, especially, an excellent exhibition of birdlife. Birds have thrived on Taveuni because there are few natural predators. Luckily, in contrast to other areas of Fiji, the mongoose was never indigenous or introduced on Taveuni, and therefore, several creatures that have vanished on other islands in the archipelago still flourish here on Taveuni.

Taveuni was once home to furious warriors, but Taveuni’s local people still ooze pride and trust, as a part of their culture. Visitors to the private resorts and beautiful villas on Taveuni find that the locals are amongst the most friendly and kind individuals on the islands of Fiji.

There are a lot of exciting things to do in Taveuni. Known for its coconut estates, Taveuni’s attractions also include world-class diving, a variety of indigenous greenery, and breathtaking waterfalls.

There are a lot of exciting things to do in Taveuni. Visitors can do world class diving on the Rainbow Reef, known as the soft coral capital of the world. Probably the most immaculate swimming is off the shoreline at numerous sites. Kayaking and kayak fishing are also fabulous things to do in the quiet oceans. Visitors interested in fishing will find a wide range of sports fishing near the island. From popping, trolling, jigging and fly-fishing, you can experience all types of ocean fishing in unblemished waters.

Beyond the ocean there are also a wide range of activities. There is a guided horseback trail ride that takes individuals up one of Taveuni’s highest mountains. The views from the top overlook the ocean and parts of the green island. Along the way there are different farms of dalo and kava to see, a terminated volcanic hole, and after reaching the summit, a large view overlooking the two sides of the island.

Also, there are delightful waterfall hikes to experience. All these things can be experienced on a pleasant South Pacific island, with the friendliest people on earth, in the midst of rich culture, and an assortment of accommodation provided by luxury Taveuni hotels.